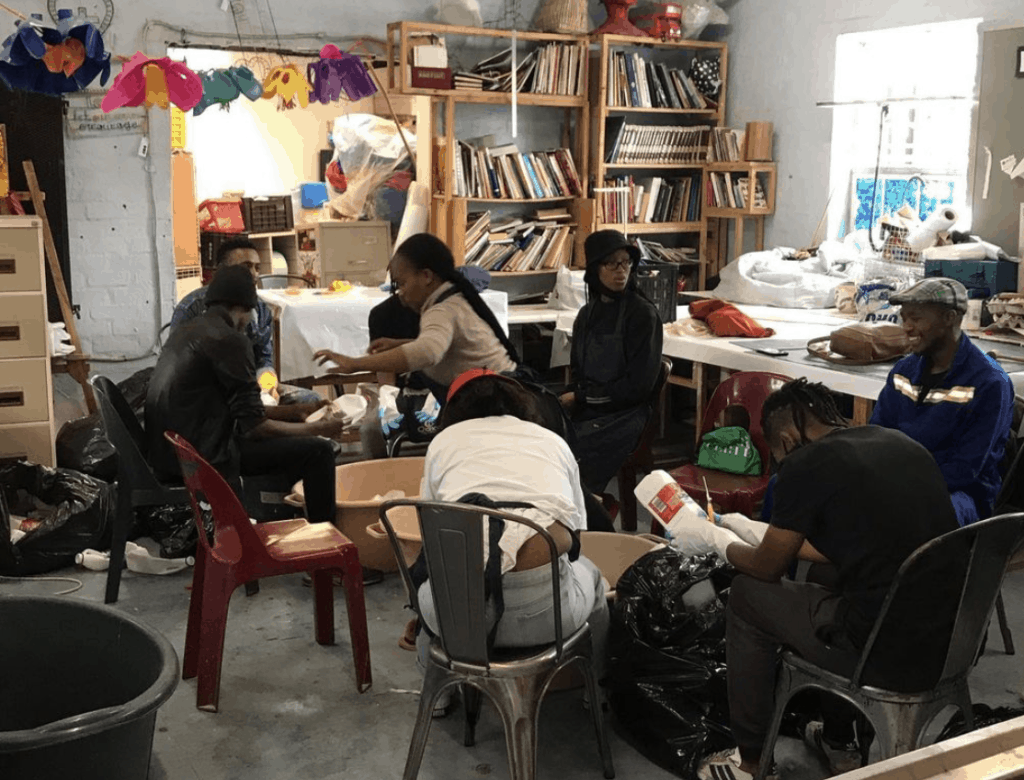 Over the last 4 years since the founding of Our Workshop, we’ve been through a lot together.

This interpersonal journey we’ve embarked on is the real work of Our Workshop – to forge bonds and connections between people who wouldn’t have even met without the existence of our shared workshop space in Langa.

This has always been the whole point of the organisation: to create a space for intercultural and interracial overlap in one of the most unequal cities in the world. Aside from differences brought about because the white and black members have had such different socio-economic upbringings, there have also been deeply rooted cultural misunderstandings and hurdles. We’ve learned to overcome these by spending time together in a creative space. Not to mention the basic conflicts and friction that can come about because of differences in personality!

Ella Petousis (23) from Cape Town joined Our Workshop in 2019 after she graduated from the Michaelis School of Fine Art. She discovered the project from a workshop hosted while she was studying and wanted to become more involved. Here’s what she has to say about her experiences so far:

“I really enjoyed the space and the people who made up the team, so I was keen to come back and join in.

Being an artist/maker in the Our Workshop team is really meaningful because the project in its essence is based around collaborative making.

Making work in a social capacity is really fun and allows for a more fulfilling way of working because of the constant flow of skills, ideas, practices, etc. I see the project as a space for learning to work on artistic projects in a team, and taking on different roles therein.

I also value the time it offers for me to spend with people who live under very different circumstances to me, and enables me to connect meaningfully within the framework of ‘making’ and expand my knowledge of people’s lived experiences in a township setting.”

Creating the Foundation to Draw People Together

But it’s been slow and difficult work, achieved over the full span of the years spent together in Langa doing various workshops and jobs all to do with the alchemy of up-cycling. We also used the design thinking methodology to slowly respond to all the users’ needs and to co-create the direction and fabric of the organisation itself.

Nqobile Mapipa (19) from Cape Town is an artist focusing on drawing and painting. The project means a lot to her because she always wanted to show her skills, learn more about art and also learn how to work with people. Her thoughts on where she’s heading with the project:

“I want to achieve a lot, most importantly I want to reach a point of independence by being able to start my own business by learning and acquiring all the skills that the workshop teachers are going to teach.”

This work of co-creation is harder than it sounds, and requires a big time investment. The term gets mentioned quite a lot, but to do true collaboration and co-creation, you need to build solid interpersonal bonds. At Our Workshop we have grown the roots of strong relationships, to effectively develop as a team.

Hlumelo Mquqo (33) from Cape Town, lives in Langa. He is a versatile handcrafter and musician, with beads being one of his preferred materials. To him the project means the future and the uprising of young African pioneers who will be a force to be reckoned with in the near future. He believes it serves as a vessel that will carry those who have lost dreams and unfulfilled purposes in life. Here’s what he has to say about his vision for his crafts and the future of the project:

“I would love to achieve a brand established through the structures of Our Workshop and the networking opportunities that come with being part of the team. I want to stand at the top of a mountain flying high the flag of the institution, having a solid brand accompanied by a team effort and success in uplifting one another.”

One of the biggest hurdles we still contend with, is a lack of access to digital communication tools amongst some members. If we all had smartphones and access to sufficient data (as in most first world situations), we could have a much more cohesive group with shared information online.

Since that’s been impossible, we started to have a weekly meeting to sit together and forge our way forward as a group, where everyone’s voice is heard and where many conflicts and disagreements came to the surface. But this is the work of the project – overcoming differences and finding similarities and ways to work together, and all find mutual benefit for each other by working together and acting as support for one another.

Phumzile Konile (21) is originally from Mafikeng, having moved to Cape Town for her schooling. She is a multi-disciplinary artist, currently focusing on making jewellery.

When asked about Our Workshop, Phumzile commented:

“I have a space in which I can be inspired by other artists.
I would love to make more connections and make use of the space more.”

The Future of Our Workshop

Unfortunately, but also most interestingly and significantly, over time the most difficult hurdle was age. The hope at the outset was that we could accommodate all different ages, sexes, races etc. But after going through a particularly difficult month or two in 2019, the older members decided not to continue working with us. This is how we became a youth focused organisation which exists to allow emerging black designers access to the greater creative industries in Cape Town.

Richard Mandongwe (49) is originally from Harare, Zimbabwe. He moved to Cape Town in 2003. He is one of the older makers who decides to stick around, enjoying the interaction with younger makers.

He specialises in wire design, incorporating plastics into his artworks.  Richard started exploring up-cycled products at the age of 17. He was introduced to the concept by his girlfriend, who is now his wife.

Here’s what he has to say about Our Workshop’s role in his life:

“I’ve benefitted a lot from Our Workshop exposure, and some big jobs have been coming through the project, which I on my own could not tackle. But with the assistance of Our Workshop, I’ve been able to do jobs such as a commission for Faithful to Nature.

I did that one with a bunch of guys from Our Workshop.

It helps to interact with other people of different tribes. It makes me gel with them perfectly, learning their culture, and they’ll be learning my culture as well. The main idea is to come up with some designs that have never been seen before. It’s the young blood, because I do believe that creativity is not limited.

As long as one is still surviving, still have the willpower, we’ll keep on coming up with new designs, good things, and beautiful things.

Our main theme is to be environmentally friendly, that’s why we try as much as we can to recycle. There’s nothing that goes to waste at Our Workshop, this is what I’ve learned down the years.